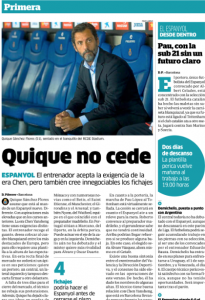 Pau Lopez to Tottenham rumbles on in the Spanish media, with a couple of days left of the transfer window. The 21 year old goalkeeper is now away with Spain’s U21 squad, and he may never return to Espanyol.

The transfer can be closed when Espanyol’s replacement arrives, but there’s no claim of who that may be, although they’re not expected to be particular fussy.

There’s no mention of what would happen with regards to a medical for Pau. The Spanish U21 squad are preparing for a match against San Marino on September 1st. Luckily that match is in Spain, meaning it would probably be easier for Tottenham to get access to the player.

A move would be a loan which then turns into a permanent deal. After Michel Vorm’s excellent performance at the weekend, the whole thing seems quite curious.

Pau will gain nothing from being a third choice, and Vorm doesn’t deserve to drop down either.