In their Wednesday edition, Catalan newspaper Sport have an article on Andre Gomes potentially leaving Barcelona during January.

It’s the same situation as the summer, Gomes hasn’t impressed as a Barca transfer, the club are looking to get some wages off their bill, and a transfer seems a reasonable conclusion.

This has been the case for months, and over the past week the English media dragged Tottenham back into the situation and the Italian media dragged Juventus in, just like the summer and with seemingly little reasoning behind it.

Sport stated ‘Andre Gomes is evaluating the possibility of asking Ernesto Valverde’ if he can leave Barcelona. That was quickly changed to claims that Gomes has actually asked to leave, put in his own version of a transfer request.

That’s not what was said, it’s an exaggeration.

The exaggeration has travelled so fast and been used so much to talk up a move to Tottenham that Calciomercato reckon it could help Milan sign Mousa Dembele. They state Tottenham are in negotiations to sign Gomes from Barcelona, almost certainly another twist of the truth, and that could leave the door open for the Belgian. 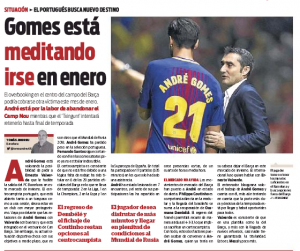 This arms race on the Gomes to Tottenham rumour could see claims of Mauricio Pochettino picking him up in a taxi next, there’s not a lot of places left for it to go.

The reality almost certainly is that Gomes remains at least half available, Tottenham were a long time ago deemed a reasonable destination by the Catalan media, and the player would be fortunate if they do make an attempt.