Erik ten Hag will this week arrive in England to start his new life with Manchester United.

His goodbye from Ajax has been protracted, and as part of a round of interviews with the Dutch media, the manager has spoken to De Telegraaf.

There’d been some doubts around what Ten Hag would think of Cristiano Ronaldo, and whether he’d believe the club legend has a place in his new system.

Ten Hag looked to address that clearly and quickly, and is quoted by De Telegraaf as saying: “I look forward to working with him. Ronaldo is a giant. Because of what he’s already shown and I think he’s still very ambitious. Of course I’d like to keep him with us. He has been very important for Manchester United this year and can provide great statistics.”

The Dutchman also talked about the danger of outside influences at Old Trafford, and how he’ll try to keep words from former players away from the mentality of his squad. That’s something which has been repeatedly mentioned in the Netherlands, and is an aspect they’ve clearly interested in.

However, Ajax is also a club that everyone always has an opinion on, so Ten Hag won’t be completely shocked by the coverage his management will get.

Perhaps most interesting for Manchester United fans, is the hint Ten Hag dropped about interest in Jurrien Timber. The 20-year-old has mainly been used as a central defender at Ajax this season, but can play across the defence. 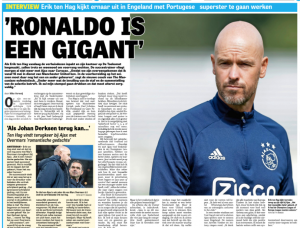 It was put to Ten Hag that there’s been rumours he could take Ajax players to England with him, with De Telegraaf mentioning Timber and Anthony specifically.

The answer from the manager was revealing: “I think that all top clubs in Europe have Timber in their sights, but I think that currently applies to a lot of Ajax players. If Antony were to go, it would be a loss for Ajax, because you have no one in the current selection who can take over his position.”