Returning to the Premier League at the first ask, Watford have started the process of bolstering their squad ahead of a tough season.

The Hornets know all too well how quickly things can go downhill in England’s top flight, and one of the areas they were looking to address was their midfield.

They did just that on Tuesday night/Wednesday morning when they announced the signing of Imrân Louza from FC Nantes for ‘an undisclosed fee’.

It’s that last part we will be focusing on, since Ouest-France on Wednesday actually have an idea of the fee paid by Watford.

The newspaper explain the 22-year-old was transferred ‘against a fee of €10m’, according to their information. 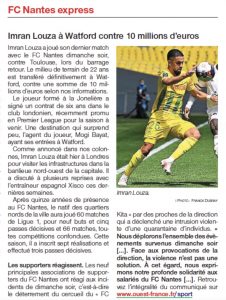 It’s stated the destination ‘isn’t surprising’ as the player’s agent, Mogi Bayat, has his ‘openings at Watford’, clearly moving his client at the first opportunity.

Joining the French club in 2006, Louza made his Ligue 1 debut back in 2019, totalling 66 appearances for his childhood club in all competitions, scoring 12 goals and picking up six assists.