At the weekend, Portuguese newspaper O Jogo featured a story which said Tottenham Hotspur had scouts at the match between Porto and Sporting.

The report didn’t say who the Spurs officials had an eye on, and with plenty of talents on the pitch, it was indeed hard to guess who their targets were.

Now it turns out that following Sporting’s match against Manchester City in the Champions League on Tuesday night, manager Pep Guardiola made big compliments towards Lions’ midfielder Matheus Nunes.

So as many Portuguese newspapers today write that those comments could lead the 23-year-old to a Premier League move at the end of the season, Tottenham are labelled as one of the clubs who’ve been in touch for his signing. 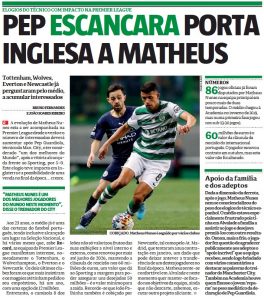 Record writes there are several Premier League clubs who’ve been following Matheus Nunes, and Tottenham are one of those who have ‘expressed interest’ in his transfer.

Problem is that at the end of last season, the midfielder signed a new deal with Sporting. He’s now protected by a contract running until 2026 and a release clause worth €60m.

That’s why Record believes the Lions will now push for a fee of up to €50m, even though other newspapers, such as Correio da Manhã, believe €30m would be enough to take him from Lisbon next summer.