Philippe Coutinho’s future beyond this season is discussed on a daily basis in the Catalan media.

The Barcelona owned player’s desire is to return to the Premier League and therefore, English clubs are constantly linked with the 28-year-old.

Spurs get a mention in Saturday’s edition of Sport and their headline reads ‘Tottenham squeeze for Coutinho’.

Within the report, it’s explained the north London club’s interest in the Brazilian ‘is real’.

The La Liga winners want to offload the playmaker this summer and their idea is to raise around €90m from his sale. Barca are also willing to lower the asking price, provided they receive another player as part of the deal.

According to the report, José Mourinho’s side would be in a position to offer Tanguy Ndombele and Toby Alderweireld. Barcelona, however, would only contemplate signing the French midfielder, depending on the ‘assessment made by Tottenham’.

In any case, the Catalan club will need a minimum fee of €50m [plus a player] for Coutinho.

Quique Setién’s side are also waiting for other Premier League clubs who have shown interest in the South American, like Chelsea, Arsenal and Everton, to ‘position themselves in the next few days to start talking seriously’.

Sport end their report by stating, ‘There is very little margin left until the end of June and the footballer’s agent is working on various options in order to find the best solution for all parties. Barça, today, does not contemplate a loan with a purchase option, although nothing is ruled out.’ 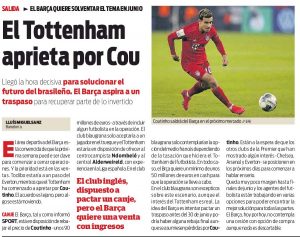 The Catalan media have been constantly pushing Coutinho towards Spurs and other Premier League sides, and will continue to do so. 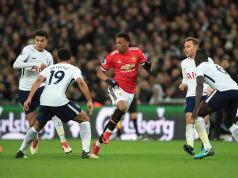 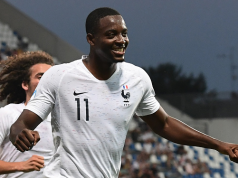