Home Europe Tottenham’s ‘bargain of the summer’ just got even better value, a steal...
SHARE

On Tuesday we covered claims from Spanish newspaper Sport that Tottenham Hotspur remain interested in Sandro. Linked with the striker since his Barcelona days, Spurs have reportedly kept up their interest since the player moved to Malaga.

When Sandro signed for Malaga last summer, on a free transfer, he and his representatives insisted on a low release clause. Sport reckon it stands at ‘less than €6m’ and they stated several clubs, with Tottenham mentioned, could be on the verge of signing ‘the bargain of the summer’.

A deal much cheaper than it should be, a player in form, a 21 year old who would rise in value the moment he signed for Tottenham: It all sounds like a painting by numbers Daniel Levy and Mauricio Pochettino deal.

And it’s just got better.

In great form, Sandro was excellent last night for Malaga, scoring two goals as his side won 2-0 against Granada. Man of the Match for the second game in a row, Sandro has now scored 5 goals in his last five games. 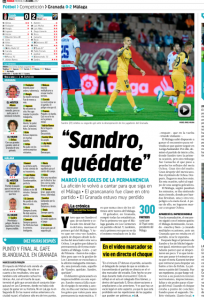 Marca say the Malaga fans could be heard signing “Sandro, quédate. Sandro, quédate”, asking the player to stay at the club. They know how hard it will be to keep him if Tottenham, or another big club, decide to do a deal.

The Spanish newspaper believe Sandro never lets Malaga down and is a big reason for their escape from relegation.

If Tottenham are genuinely interested, then the last five games must have surely convinced Pochettino and Levy that ‘less than €6m’ is more than a bargain… it’s a steal.