Monday’s edition of Marca has an article on Atletico Madrid’s targets in the transfer window.

One player they’re considering is Axel Witsel, who is available as a free agent following the end of this time with Borussia Dortmund. They’re also looking for fullbacks, with two of the main targets being Tottenham Hotspur’s Emerson Royal, and Wolves’ Nelson Semedo.

The Spurs player has been linked with Atletico Madrid for years, and is thought to be someone who Diego Simeone is a fan of. Given the manager likes players who have experience in La Liga, the Brazilian falls well into that category. 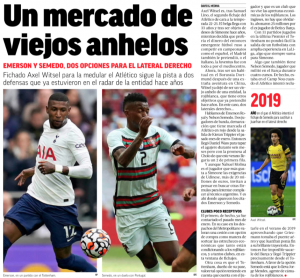 move. Los Rojiblancos are hopeful of signing a fullback on a loan deal with a purchase option, and that certainly doesn’t seem like something which would suit Spurs.

If they decided to part ways with the player then they’d surely prefer a permanent transfer rather than helping Atletico out with their financial challenges.

The 23-year-old played 44 games for Tottenham last season, and is clearly an important part of Antonio Conte’s squad.