Home Europe Tottenham target could be available for only €20m – Not expected to...
SHARE

Following reports from the English media saying Tottenham Hotspur are interested in the signing of Porto midfielder Jesus Corona, we now see the Portuguese press bringing a couple of stories about this chase.

The strongest one probably comes from newspaper Correio da Manhã, who claims that the Mexican player should no longer play for the Dragons again.

They say there are many clubs who are interested in his signing, with Tottenham being the latest to join the race. It’s written the departures of Erik Lamela and Lucas Moura from Spurs would ‘fund’ the signing of Corona.

Correio da Manhã claims that even though the midfielder is protected by a release clause of €30m, Porto would sell him with no problems if a bid of around €20m is made, especially because his contract is running out next year.

Newspaper O Jogo is another one writing about Tottenham’s interest, even though they don’t make it clear if the information is from their own sources or not.

They also write that despite his release clause, this time claimed to be of €40m, Porto would accept to let him go for a lot less. 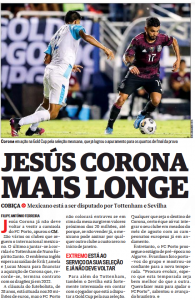 Still, the outlet says that according to people close to the player, his future should only be decided after the Gold Cup, which he’s been playing with Mexico.

It’s said Corona believes this is the ‘right time’ to leave Porto, even though he could wait and move for free next year.

However, Sevilla are also interested in his signing, and with Tottenham being close on signing Bryan Gil, the outlet points out that the transfer would make it possible for the Spanish side to go after Corona as well.