Home Europe Tottenham in talks for weeks, pressing for signing, have put proposal on...
SHARE

Italian newspaper Tuttosport today has an interesting piece on the future of Napoli star Arkadiusz Milik, who should soon be leaving the club.

The Turin outlet focuses their story on the strong interest from Juventus, who could use some of their players in a swap deal for the 26-year-old.

But the Old Lady are not alone in the race for the striker, since Tottenham Hotspur have been in talks for him as well, and have recently made an offer to sign the Polish international.

Tuttosport says Spurs have put on the table Lucas Moura and an amount of money to guarantee the signing of Milik. The London side are said to have been ‘pressing for weeks’, and have competition from Chelsea to bring him to the Premier League. 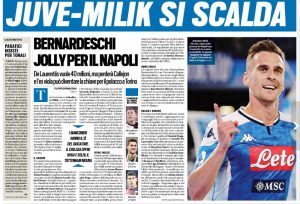 The outlet writes that Napoli would rather send the player abroad than selling them to league rival Juventus. In case of a transfer for cash, they would demand at least €40m.

But Napoli are said to be interested in a few players from the Old Lady, so they should still analyse what they have on the table.

Given Lucas Moura is Jose Mourinho’s number one fan, and the feeling is near mutual, it seems unlikely he’s been offered as a makeweight.

Since Milik’s contract with them expires in 2021, they’re letting him go now to avoid the risk of losing him for free next year.