Home Europe Tottenham still in race for midfielder, Eriksen’s departure to be crucial for...
SHARE

Although only Manchester United have been heavily linked to Bruno Fernandes lately, we’re back seeing some claims about Tottenham Hotspur’s interest in the midfielder today.

Newspaper Record brings a story about the time left to sign the player, since the Premier League transfer window is closing in about three weeks.

They say the Red Devils continue to lead the race, but Tottenham must not be forgotten, since they haven’t left the scene yet.

Record claims that the Spurs remain attentive, and a potential departure of Christian Eriksen could ‘precipitate’ a bid from the London club. 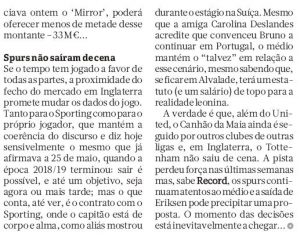 Even though Record claims that there are clubs from other countries interested in signing Fernandes, it really sounds like Sporting’s biggest hope of making a big transfer comes from the Premier League.

Record says the Lions continue to demand €70m for their captain, but other newspapers today are starting to believe that €55m or €60m plus bonuses could be enough for a deal.