Home Europe Tottenham signing player ‘would be complicated’, but it’s not dead, ‘all the...
SHARE

Last week saw the rise, fall and rise again of claims Tottenham are interested in signing Malcom from Barcelona during the current transfer window.

Mauricio Pochettino was interested in the Brazilian during the January 2018 transfer window, but Bordeaux were set against sale, despite the player agitating a little to be released.

Lucas Moura was then signed from PSG just before the window closed, and that looked to kill the idea of Malcom arriving in the summer market.

Despite that, the rumours returned, only for Malcom to then join Barcelona, having been on the verge of signing for AS Roma.

That he’s not really made any sort of impact at Barca, and is struggling to get games, was always likely to see Tottenham linked again, and Sport talked it up. 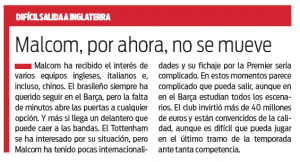 Mundo Deportivo then talked it down, before later claiming it could actually happen.

This weekend Sport pushed it again, but stated the move to Spurs ‘would be complicated’, especially on a loan, and said there may be work permit issues.

Despite that, it’s not dead, and Sport say ‘all the scenarios’ are being studied to try and find a solution for the player.