Home Europe Tottenham set up for transfer tussle with Bundesliga side – Spurs will...
SHARE

As Tottenham Hotspur continue to be named as one of the candidates to sign João Palhinha, Antonio Conte’s side better be aware how big the race for his signing is now getting.

Portuguese newspaper A Bola today features a story claiming that with so many clubs now interested in landing the midfielder this summer, his exit from Sporting is now looking ‘inevitable’.

That’s why Sporting have already set a price for his exit, which is of at least €25m, despite the €60m release clause in his contract.

Tottenham have been linked to the player for a long time and are still said to have him ‘referenced’. They’re joined by the likes of Atletico Madrid, Bayer Leverkusen, Napoli and Wolverhampton Wanderers in the race. 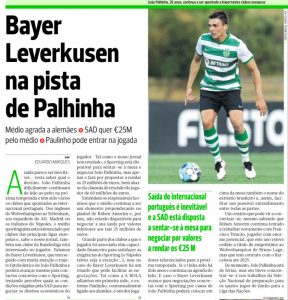 Amid this competition, there’s a special mention to two of these clubs. One of them is Napoli, who may not have enough money to cover Palhinha’s price tag.

The other one is Bayer Leverkusen. Since Sporting are interested in signing Paulinho, who players for the Bundesliga club, they could now negotiate a swap, with Palhinha moving to Germany.

So Tottenham should know that the competition for the midfielder this month will, perhaps, be fiercer than expected, and convincing arguments will be needed to win this battle.