Tottenham Hotspur’s growth under Mauricio Pochettino is even more remarkable when it’s considered the manager is working with one hand tied behind his back financially. Tottenham simply don’t have the spending power of the regular Premier League title fighters, and have to make up for that with smart purchases and youth products.

It doesn’t always work out for Pochettino, but it’s worked out often enough to see Tottenham succeed. Those players who are cast aside are still expected to bring in good fees, and that’s where Daniel Levy comes in.

Therefore a claim from Spanish newspaper Sport is perhaps worth another glance. Sport say Tottenham are one of a few clubs seriously interested in Malaga’s Sandro. The 21 year old has 10 La Liga goals so far this season in 1887 minutes, and has been continually linked with Spurs.

Tottenham were said to be interested when Sandro was at Barcelona, and now he’s succeeded at Malaga that interest has been cemented. Malaga signed Sandro from Barcelona at the end of the player’s contract, and part of the agreement included clauses beneficial to the player.

Despite his good season, Sport say Sandro can leave for a release clause of ‘less than €6m’. Over the past few months it’s been claimed he could go for ‘less than €10m’, but €6m sounds even better. 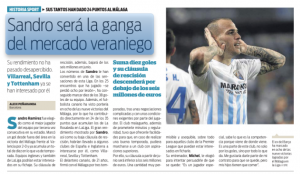 That fee would be no problem and the player’s profile could suit Pochettino, with his age, potential rise in value, and current cost almost certainly of interest to Levy and Tottenham as a club.

Sandro is a full-on centre forward, so Tottenham making a move to sign the player could cast a shadow of Vincent Janssen’s role within the squad. Sport believes whoever gets Sandro will be signing the ‘bargain of the summer’.