Sabah claim Tottenham Hotspur and Lazio are the two clubs who are ‘seriously’ interested in signing Fenerbahce striker Vedat Muriqi ahead of the next transfer window.

The Turkish newspaper claim they will ‘fight’ for the player in the summer and that those two are the clubs leading the chase for the Kosovo international.

Tottenham are reportedly looking for another striker in the summer to support Harry Kane, and Sabah say Muriqi is one of their options. It’s claimed the Premier League side are ready to offer around €20m to sign the player. 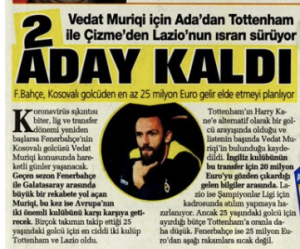 Lazio are also looking to strengthen their squad as they are well on course to securing Champions League qualification.

Fenerbahce are looking to get something in the region of €25m from the sale of Muriqi. His contract with the Yellow Canaries will expire at the end of June 2023.