Earlier on Monday, we covered an article in Marca regarding the inevitable transfer of Pau Lopez from Espanyol to Tottenham.

The Spanish newspaper claimed the deal was ‘virtually done’, and would be completed when the La Liga club find a replacement for the young goalkeeper.

Just in case you felt that Marca reporting on a Catalan club wasn’t the most reliable source for the job, Sport on Monday also confirm the transfer is just around the corner for the 21-year-old.

The Barcelona-friendly newspaper go into a bit more detail, claiming the two clubs have now sent each other all the relevant paperwork to get the deal sorted, and it’s now done. 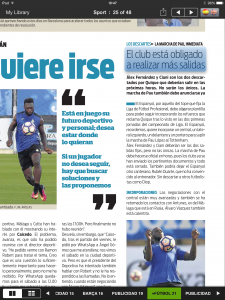 All that needs to be done is make the transfer official on each other’s websites etc…, and that should be done in the ‘coming hours’ (which could be anytime on Monday or in the next 72 hours).

Espanyol are still very much active in the transfer window, needing a centre-back, a left-back, a forward and a goalkeeper to replace the departing Lopez.

Tottenham, down their end, need to make this deal official, as well as finally confirming the arrival of Georges-Kevin Nkoudou, who passed a medical in mid-July ahead of a potential €11m transfer to White Hart Lane.