Tottenham are ‘ready to pounce’ on Inter Milan defender Alessandro Bastoni and make a ‘major bid’ to secure him this summer.

That’s according to Corriere Dello Sport, who say Antonio Conte has put his former Inter star at the top of his wishlist as he plans for a big summer transfer window rebuild at Spurs.

Bastoni was very much a key player for Conte during his time with the Italian club, with the coach pushing him into prominence and urging the club to sign him permanently in 2019.

He’s a big fan of the defender and is now ‘waiting for him in London’, with it believed that he will ‘order’ Fabio Paratici to make a move once Champions League football is secured.

Inter might be open to a deal as well as the funds raised would allow them to keep several stars at the club rather than moving them on this year.

Should Tottenham make a move, they will have to pay big to get their man, though, with Bastoni valued at €60-70m. 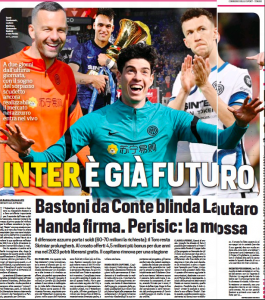 That’s a big price to pay, but Spurs paid €50m for Cristian Romero last year, and Inter will use that as a benchmark for this deal, adding money on for Bastoni being a year younger and, crucially, left-footed.

Whether Tottenham are willing to pay such a figure to satisfy Conte remains to be seen, but they are ‘in pole’ for the Italian’s signature at this moment in time.