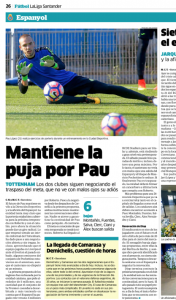 Spanish newspaper Marca have a feature taking up almost a full page in their Tuesday edition on the future of Pau Lopez, trying to give some kind of update on the situation.

Mauricio Pochettino is driving Tottenham Hotspur interest in the 21 year old goalkeeper, but the clubs can’t agree on a price. Espanyol want €5m for a deal to go through, and Tottenham have so far offered just €2m, which does seem very on the low side.

However, what does go in the favour of Spurs is the Espanyol purchase of Roberto, a 30 year old goalkeeper. He’s expected to be number one, with the idea being that Pau gradually takes over from him. A place on the Spurs bench is therefore probably more appealing.

Roberto cost €3m, so Espanyol clearly feel that if they’re paying that for him, then €5m is reasonable for a young goalkeeper so highly rated he’s already been in a senior Spain squad.

Marca say Espanyol had been planning for a season with Roberto and Pau, and that situation may well see a ‘radical’ turn. They believe it’s very possible a Spurs move could happen soon, obviously depending on what they’ll pay.