The Italian didn’t include Giovani Lo Celso in the squad to face the Blues and the 25-year-old took to social media to explain he is “100% in good physical condition”, feels “very well” and has “no problem”.

In the last 24 hours, reports in England have linked him to Sevilla and these claims are relayed in today’s edition of AS. The newspaper, when providing a further update on the player, explains Real Betis are also in the picture for him.

The attacking midfielder’s situation at Spurs is ‘not easy’. Both Sevilla and Real Betis are ‘attentive’ to his situation, and the player is ‘willing to change scenery in search of more prominence’.

Spurs took the Argentina international, initially on a €16m loan deal from Betis in 2019, before his stay was made permanent in 2020 for €32m.

Paris Saint-Germain were to receive a part of the fee from Lo Celso’s sale to the Premier League side and got only part of the €32m from Real Betis. Therefore, PSG took the Spanish club to the Court of Arbitration for Sport [CAS].  Tottenham are ‘not too 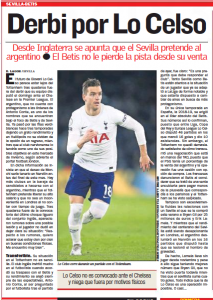 satisfied’ with how this episode turned out.

AS also add the English club’s relationship with Sevilla is not ‘excessively fluid’ after they carried out a swap deal last summer, involving Erik Lamela and Bryan Gil.

The latter has struggled for minutes in London and is reportedly looking to go out on loan in January.

Indeed, Sevilla and Manuel Pellegrini’s side are ‘attentive’ to the South American’s situation, but AS say ‘everything indicates that Lo Celso is an impossible operation. Or almost…’