The player has spoken to journalist Bolívia about his departure from Paris Saint Germain, his arrival in London, and the great season he’s just had for Spurs.

When answering question from fans, Lucas was asked the reason why he was benched in the Champions League final against Liverpool, especially after having such an amazing performance in the semifinals against Ajax.

All interviews with Desimpedidos are very relaxed and funny, so he could blame Mauricio Pochettino without feeling guilty.

“Of course I got upset,” Lucas told Desimpedidos. “I wish I had started playing. But I got so much more upset that we lost. We believed very much that we were able to be champions. And man, it was difficult. I cried a lot after the game. Because it was so close, so close.

“But what if I had started playing? We can’t tell whether we would have won or not, what would have happened. This is difficult to answer. Manager’s mind, no one can understand. We must respect, accept.”

So Bolívia suggested if it happened because Pochettino is Argentine, and Lucas joked: “It may have been some rivalry, I don’t know (laughs).

Another interesting question was about facing Virgil van Djik. Lucas Moura was first asked if the Liverpool defender is as good as people say, and he confirmed it.

“Hey, the guy’s good. He’s two metres tall, strong, and the Liverpool team is a very good fit, with a lot of chemistry. So he had an excellent season. He was elected the best in the Premier League, I think.”

But when talking about the stats which say no one has dribbled past him for months, the Tottenham player says he doesn’t really believe it.

“Dude, now this question there I don’t know if it’s true. They say he hasn’t been dribbled past since… whatever. If the guy is past him, it’s already a dribble.”

When quizzed if van Djik is the best defender in the world, he didn’t fully back it: “In the world… there are a lot of people there. But for the season, I think he’s among the three. Among the three!”

Here’s the full interview below. In case you wonder why the interviewer is wearing a mask, you won’t be the first to find it strange. Bolívia reveals in the chat he had some problems with the London police when dressed like this in front of the Big Ben. 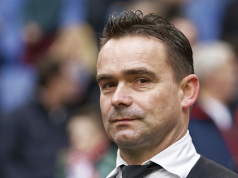 “He would much rather go to Arsenal” – Doubts raised about...