Home Europe Tottenham player must be ‘wary’ – Insinuations on attitude have a history...
SHARE

After a big-money move to Tottenham this summer, things have not exactly worked out well for Tanguy Ndombele.

The French midfielder arrived at Spurs with a big reputation, and plenty of expectation because of it, but is yet to impress at the club.

Several injuries, a struggle to adapt to the Premier League and Tottenham’s inconsistency have all led to the midfielder’s failure to hit the heights that were expected.

His short Tottenham career hit a new low over Christmas, with José Mourinho revealing that he had asked not to play, despite the fact he wasn’t injured.

That didn’t sit well with Mourinho, who later compared Ndombele’s lack of commitment to the likes Erik Lamela and Oliver Skipp.

And that should make Ndombele ‘wary’ according to L’Equipe, who explain that Mourinho did the same thing when he fell out with Pogba at Manchester United.

His relationship with the French midfielder ‘begun to sour’ when he started to compare Pogba’s attitude with that of Scott McTominay.

Mourinho’s comparison between Ndombele and Lamela this time around ‘could not have been unintentional’ and the Tottenham boss will have been ‘less fond’ of having an uninjured player tell him he does not want to play.

The whole piece is essentially a warning to Ndombele that Mourinho may be questioning his attitude, which, as history shows, does not work out well for players.

This is not the first time Ndombele’s attitude has been questioned either.

Back in April, we covered a report from L’Equipe that stated the midfielder’s attitude was a debate on more than one occasion at Lyon. 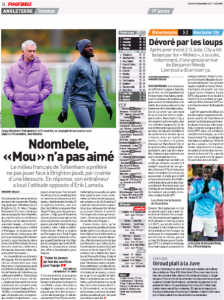 They stated: ‘It’s unanimous about Ndombele’s huge sporting potential. But not on his behaviour. Where some see it as a way of concealing a reserved nature, his attitude seems haughty to others.’

This was all before his move to Tottenham and, as far as L’Equipe are concerned, the questions from Lyon are now being asked by Mourinho at Spurs.