Heading into the delayed Euro 2020 tournament, France were expected to go far, but ended up being knocked out by Switzerland in the round-of-16.

There were rumours of trouble in the French camp, with Didier Deschamps failing to get the best out of his star packed squad. Tottenham’s Hugo Lloris is national team captain, and has long been the man the team look to for stability.

His frustrations with others in the squad have been building and came to a head following France’s 1-1 draw against Ukraine at the weekend. That match came just days after the same result against Bosnia and Herzegovina, and there’s now building panic over the country’s World Cup qualifying campaign.

L’Equipe report Lloris was ‘annoyed’ after the match and sent messages out expressing his dissatisfaction with the situation. The Tottenham goalkeeper believes some players are being too individual in their approach, not putting the team before themselves. 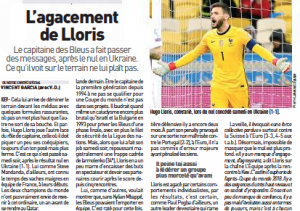 Lloris managing to unite a national squad which had faced issues in the past, has been a large part of the country’s success under Deschamps, but the Tottenham player is now ‘struggling’ to maintain that.

The French newspaper believe he’s lost a close ally in Olivier Giroud, with the striker not being called up for the current international break, and now his frustration is being shared.