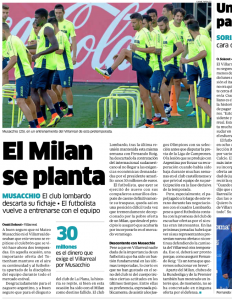 Spanish newspaper Marca report on Thursday that Villarreal and Mateo Musacchio don’t want another repeat of their Tottenham Hotspur summer. The Argentine defender was strongly linked with a move to Spurs previously, and Marca say an offer was in the air the whole summer.

History is repeating itself with AC Milan, say Marca. The move had been rumoured all summer, and now it looks like things have completely collapsed, with Musacchio once again missing out on his big move.

Milan, as often seems to be their pattern these days, were credited with interest but then failed to come up with the financials to make a deal happen.

Everton have also been linked, and the last thing Villarreal want is for the same thing to happen again.

It’s conceivable that Musacchio is interesting Everton, but it’s also conceivable that the most recent reports are simply around because of old links, and that those were quite weak anyway.

Given the failed Milan deal, and the previous failed Spurs move, if Everton do want Musacchio then they could probably get him with a quick and near reasonable bid.

Marca acknowledge interest from the Premier League, and say Villarreal want €30m for the 25 year old. Everton could probably get him for €25m.