Home Europe Tottenham have ‘made it clear’ they’re keen on player ‘in past few...
SHARE

On Thursday, Tottenham Hotspur confirmed Harry Kane will be out of action until April due to the hamstring injury he sustained against Southampton.

It’s no surprise that Spurs will look to bring in a striker in January and SpazioMilan talked about the north London club making an offer (€5m loan fee plus an option to buy for €30m) for AC Milan’s Krzysztof Piątek.

That wasn’t enough for Milan, who want a guaranteed sale.

Inter have made it clear to Milan that they will only do business for Politano,if it’s a permanent transfer.

The funds to sign the Inter player can come by selling a few of Milan’s own, and therefore they’ve started working on an operation to offload Piątek.

It’s claimed Tottenham are ‘interested’ in the Poland international and Milan are waiting for José Mourinho’s side to make a concrete offer for him.

Spurs have ‘made it clear in the past few hours’ that they’re keen. 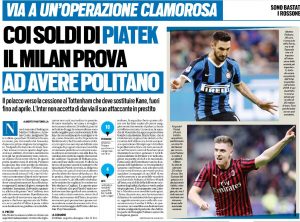 Milan’s idea is to sell Piątek so that they can use the money from his sale to sign Politano.

Even though Tottenham’s interest in the former Genoa star is mentioned, Tuttosport don’t make it clear whether Spurs are looking to sign him on a loan or a permanent deal.