Tottenham Hotspur manager José Mourinho is ‘behind’ his club’s interest in Real Betis midfielder William Carvalho, according to AS on Wednesday.

Mourinho is said to be looking for a player in the centre of the pitch and the 28-year-old’s profile fits the bill.

Spurs have joined the list of other suitors like Leicester City, Watford, Wolverhampton Wanderers, Inter Milan and AS Monaco, who have ‘already asked’ about the Portugal international.

Betis are ‘more determined every day’ to sell Carvalho in the upcoming window, partly because he’s one of the highest paid squad members, and it’s believed he has a market.

AS say the player has never convinced with his performances and has struggled with injuries this season, which forced him to go under the knife. He has been restricted to just nine league appearances in the 2019/20 campaign.

The Spanish club own 75 percent of Carvalho’s economic rights and the remaining 25 percent belongs to his former employer, Sporting. 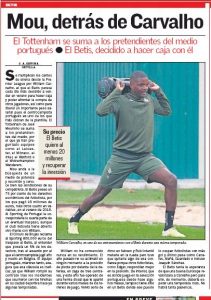 Betis were hoping to earn good money if he had a good European championship with his national team. However, that won’t be the case because the tournament has been postponed to 2021.

Having paid €16m to Sporting in 2018, Betis want ‘at least €20m’ to recover the investment made on Carvalho’s transfer.