On January 11th, Marca reported Manchester United are reluctant to soften their stance regarding Anthony Martial joining Sevilla on a loan deal in the winter market.

As things stand, it seems impossible for the La Liga side to sign the Red Devils forward and the situation has forced them to look elsewhere.

Tottenham Hotspur’s Steven Bergwijn has emerged as an option and AS on Wednesday say the Dutchman is the ‘preferred alternative’ to the United player.

In his pre-match press conference on Tuesday, Antonio Conte said he wants to retain the 24-year-old beyond the ongoing transfer window. 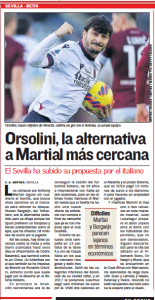 Despite the former Chelsea manager’s public stance, the Spanish newspaper explains Spurs ‘prefer’ to sell the ex-PSV Eindhoven man in January. However, the La Liga side are looking to sign an attacker on a loan deal in the mid-season market.

According to AS, ‘Bergwijn seems far off’ due to the economic conditions needed to carry out the signing. Apart from that, Sevilla will face tough competition from Ajax to take the Netherlands international, and the Amsterdam club have already submitted an offer for him.

These two reasons have ‘diluted’ Sevilla’s chances of taking the player away from the north London club this month.