PSG welcome Barcelona on Wednesday evening for the second leg of their Champions League tie. The French side are leading 4-1 and look near certain to progress to the next round.

Inevitably, the French media are building up to the game and that includes L’Equipe having a Tuesday look at Frenkie de Jong. The Dutchman was thought to be close to moving to PSG before he ended up going to Barcelona instead, and it was even reported in the Netherlands that a move had been agreed.

Less reported was interest from Tottenham Hotspur, and now Eric Abidal, who was technical secretary at Barcelona at the time De Jong arrived, has revealed that Spurs were genuinely in the running.

Whilst explaining how the Catalan club convinced the midfielder to snub PSG in favour of them, Abidal said: “I was already following Frenkie before arriving at the club. We had to recruit for this position and that was our priority. 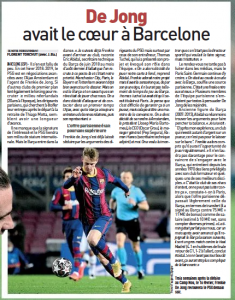 “Manchester City, Paris, Bayern and Tottenham made good progress on the matter. But we are Barca and we knew that his dream was to play for us. We therefore decided to attack and first contact Ajax, with whom Barca has always had good relations, then his representative.”

Given the level of competition it was always a transfer race that Tottenham would likely end up losing, yet at least they made an effort to try and get the player from Ajax.