The front page of today’s L’Equipe, M’Baye Niang dreams of going to Olympique de Marseille, as ‘light talks’ already having started with that goal in mind.

The Senegal international is one of the players André Villas-Boas wants in the south of France for next season and their likely Champions League campaign, but one of the Portuguese’s former clubs, Tottenham, could stick a spanner in the works.

The French newspaper reveal that Spurs are also looking at the 25-year-old, ‘leading’ a pack of Premier League clubs ‘attracted’ by what the forward has to offer.

It’s stated Tottenham have ‘started to position themselves’ for the former winger now turned centre forward, who scored 15 goals in 36 appearances this season for Rennes.

While he’d likely make more money in London, L’Equipe do logically write he wouldn’t get as much time there as he would at Marseille, with AVB prepared to move away from his beloved 4-3-3 to a 4-4-2 that would accommodate Niang, Dimitri Payet, Florian Thauvin and Dario Benedetto. 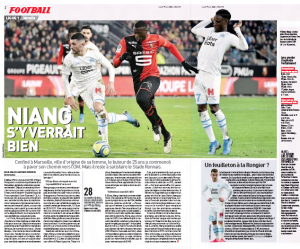 With a price tag believed to be around €20m, he wouldn’t be an expensive option for Tottenham, and it will likely come down to the player himself when it comes to deciding what’s best for his future.

Considering how things went for both Clinton N’Jie and Georges-Kévin N’Koudou following their moves from Ligue 1 to Spurs, it might be safer, and maybe even wiser, for Niang to give Champions League a go with Marseille rather than battling it out with Harry Kane (which seems almost futile) for a starting spot in José Mourinho’s line up.