Multiple reports in Spain and England explained on Tuesday that Tottenham Hotspur’s Kieran Trippier is close to joining Atletico Madrid.

On the same day, we carried a report from AS, who explained the Champions League runners-up like Angel Correa and ‘it remains to be seen’ if he will be included as part of the deal that will see the right-back move to the Wanda Metropolitano.

Wednesday’s edition of the same newspaper claims the north London club are one of the sides keen on signing the forward.

After spending five seasons with Los Rojiblancos, the Argentine believes his time with Diego Simeone’s side has come to an end and wants to start to new phase in his career elsewhere. 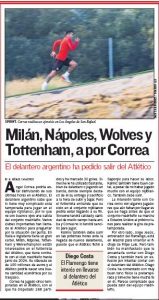 Any approach from Mauricio Pochettino’s side will see them face competition from clubs in England and Italy as AS claims there are other sides like Milan, Napoli and Wolves interested in the South American.

Correa has a contract with the La Liga club until 2024 and has a release clause of €100m.

No club will go anywhere near that, and whilst AS say Atletico could get a ‘good economic amount’ they don’t make it clear what that may be.