That’s according to Mundo Deportivo, who say the north London club already made some enquires months ago and were told the La Liga side are asking €14m for the custodian.

Spurs found the fee quoted by the Catalan club ‘expensive’, which is why they looked at the possibility of taking the 32-year-old on a loan deal, but even that’s ‘complicated’.

The Brazilian has failed to feature regularly for the La Liga side since he arrived at the Camp Nou from Valencia in 2019.

Ronald Koeman’s side need to raise funds and lower their wage bill, and Mundo add both parties are ‘still looking for a way out’. 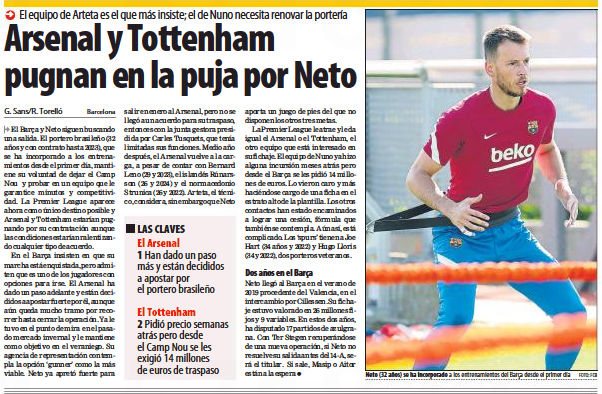 The newspaper states the Premier League seems to be the ‘only possible destination’ for the South American, where Tottenham and Arsenal would be fighting for his signature.

However, the ‘conditions would be slowing down any type of agreement’ for the deal to be closed.

Neto, for his part, is attracted towards English football and is open to joining either Spurs or the Gunners.

Tottenham are close to signing Atalanta’s Pierluigi Gollini on loan and it wouldn’t make sense for them to bring in another keeper, especially when there’s need to address other positions in this window.