In August, L’Equipe reported that Arsenal and Tottenham Hotspur have ‘shown interest’ in Eduardo Camavinga and it was also explained two north London clubs are likely to return for him in 2020.

Sport now claims the Rennes teenage sensation, who has ‘undoubtedly been one of the great attractions of Ligue 1’, is on Barcelona’s radar.

Quique Setién’s side are aware the midfielder’s asking price would be high because he’s popular in the Premier League.

It’s claimed Tottenham are ‘interested’ in acquiring the France U21 international’s services.

Rennes have warned they’ll be ‘inflexible’ while negotiating for their star player and the suggestion is his side wouldn’t let him leave for less than €50m. The English clubs can afford to pay Camavinga’s asking price.

Barcelona have already made contacts with Camavinga’s environment, and Liverpool are also in the picture, so this wouldn’t be an easy battle for Tottenham.

Although Camavinga is happy with the La Liga winners’ interest, his camp wants to listen to offers made by all clubs. 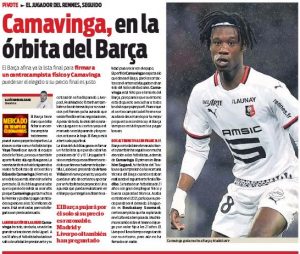