In the worst kept secret of recent times, Tottenham have some sort of interest in Dušan Vlahovic in case they lose Harry Kane.

The transfer makes a lot of sense, especially since Fabio Paratici is a big fan of the player, as the two players both know where the back of the net is and have similar physical attributes.

Attempts were reportedly made, and there was even a claim that the player’s agents had spoken to Spurs to talk about a potential move.

However, they aren’t the only ones to have spoken with Daniel Levy and co. about a deal, as Corriere Fiorentino claim both Daniele Pradè and Giuseppe Barone, two directors at Fiorentina, held ‘direct contact’ with Spurs about the striker. 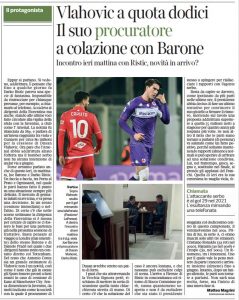 This was during a ‘trip to London’, and it’s recalled that Conte is a ‘great admirer’ of the 21-year-old, with the London club ‘ready to come forward’ last summer during the Nuno Espírito Santo era.

All of this suggests the interest is still very much there, and it’s one that won’t disappear, even if it is clear that Vlahovic isn’t interested in leaving Fiorentina midway through the season.