Finally, after nine years of Juventus winning the Serie A title, Antonio Conte’s Inter managed to upset the hierarchy and bring the trophy back to Milan.

It was an impressive season, by all means, and the feat hasn’t gone unnoticed by clubs who are searching for a manager capable of turning things around swiftly and efficiently.

Conte did just that at Chelsea, and now Tottenham Hotspur are interested in him to do the same thing for them now that José Mourinho has been sacked and taken a new job at AS Roma.

This is according to Corriere dello Sport, who reveal that Spurs ‘came forward’ for the Italian manager, who has ‘kept the door open’.

As of yet, ‘there is nothing decided’ and ‘not even a real proposal on the table’, but ‘the talks with Tottenham would have also pushed towards technical assessments of the current squads and on the main needs to strengthen it’. 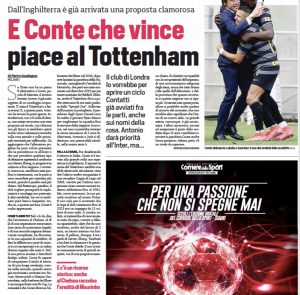 However, while talks have taken place and he believes ‘the cause of Tottenham would be an extremely stimulating challenge’, Conte pointed out his ‘priority goes to Inter’ and will wait for a chat with the club’s owner before making a decision, with that meeting ‘scheduled only at the end of the season’.

Thus, ‘the ball is between Steven Zhang’s feet’ and it will be up to him to see what he wants to do with his current manager.

All in all, the talks with Tottenham ‘have been fruitful and interesting, but the parties have agreed to restart them later when the picture becomes clearer’.

In the meantime, it’s explained Spurs ‘will continue explorations and surveys with potential other candidates, including Maurizio Sarri and Atalanta’s Gasperini’.