On Wednesday, we covered claims from Germany about Tottenham Hotspur potentially returning for Wout Weghorst in the January transfer window.

Jose Mourinho’s side had been linked repeatedly during the summer window, when it was clear Spurs needed another striker to provide support to Harry Kane. Carlos Vinicius arrived on loan from Benfica, however he’s struggled for minutes in the Premier League.

SportBild presented Tottenham as being keen on the Wolfsburg player for January, however, it was stated the Bundesliga club would be looking for around €35-40m.

Weghorst himself was said to be keen on a move to English football, and to a club where he could have a chance of winning trophies.

Dutch newspaper De Telegraaf has now spoken to the striker, and he’s been open about the Premier League club trying to sign him: “Shortly before the transfer market closed, Tottenham Hotspur got serious. Those were hectic days. You can then say very boldly that you focus on your own club, but subconsciously it does of course do something to you. You also saw it in my game. 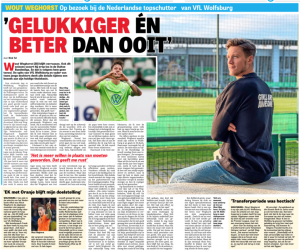 “Looking back on that situation, I think: sometimes you also have to be satisfied. That does not mean that I do not want to make the step to the European top, on the contrary. But I am just very happy in Wolfsburg and I get a lot of appreciation here. I cherish that.”

Weghorst is enjoying a good season so far, and his happiness with life shines through right now. That said, should Spurs return for another try next month then it’s near certain his head will be turned again.