Tottenham’s move for Sevilla youngster Bryan Gil is at an advanced stage, with documentation ready to be signed to finalise the move.

That’s according to ABC Sevilla, who back up claims that the two sides are negotiating a swap deal for the Spaniard.

They explain how it emerged on social media yesterday afternoon that Tottenham were locked in negotiations with Sevilla over a swap deal for Gil, which would see Erik Lamela heading the other way.

The newspaper says the Spanish side are ‘closing’ what could be the ‘deal of the summer’ as they’re set to pocket €25m and Lamela in exchange for their man.

That’s considered a ‘win-win’ for both clubs as Tottenham will be taking a young player with ‘great projection’, and Sevilla get an experienced player and the money they need to add to their budget.

Sevilla were at first reluctant to accept a swap deal as they want the money in the accounts but the lack of movement in the market, particularly around Jules Koundé, meant they changed their minds. 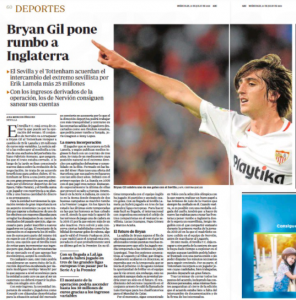 The income from Gil means selling the Frenchman becomes less of a priority, and so it is full steam ahead on a deal that could rise to €30m if the various bonuses are met.

Gil, for the moment, is in Tokyo with the Spanish squad for the Olympic Games and is focused on that, but ABC say a deal is close to being finalised.

According to them, the transfer is already ‘pending the exchange of documentation and the signature of the interested parties’.

In other words, everyone just needs to sign on the dotted line, and it’s done.

That suggests talks between the two clubs are at an advanced stage, and Gil will be a Tottenham player sooner rather than later.