Ever since Fernando Llorente left Tottenham, the club have been looking for an adequate backup for Harry Kane.

Vinicius Junior was brought in on loan from Benfica last season to placate José Mourinho, but the Brazilian didn’t do enough to warrant his purchase clause being triggered, meaning he returned to Portugal.

As things stand, Tottenham are without a suitable replacement should Harry Kane get injured, and players of Dusan Vlahovic’s ilk have been linked since the arrival of Fabio Paratici as director of football.

The Serbian would be very expensive, and feels more like an option should the Spurs star be sold, and if Corriere dello Sport are to be believed, a new, very surprising option, is being considered.

That’s Simeon Tochukwu Nwankwo, more commonly known as Simy, who is currently contracted to Crotone in Serie B.

Yes, that’s right: Tottenham are being linked with a player currently in Italy’s second-tier.

That being said, Simy knows exactly where the goal is, having found the back of the net 20 times in 38 league games last year, and boasts an impressive profile, standing at 1.98m tall. 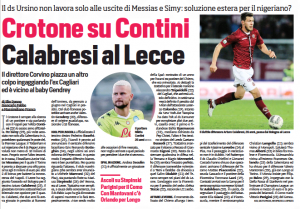 That’s five centimetres taller than Fernando Llorente, which gives you an idea of just how tall the Nigeria international actually is.

Corriere dello Sport explain that while Salernitana, newly promoted to Serie A, are interested in Simy, ‘the doors of the Premier League could open wide’ as Spurs ‘are on the Nigerian that director of football Peppe Ursino values at no less than €10m’.

So, Paratici has been warned: if he wants his wildcard choice for the striker role, he’ll have to pay up a fair chunk of money, such is the goalscorer’s importance to Crotone these days.