Tottenham Hotspur manager José Mourinho is on the front page of Portuguese newspaper Record today, as he’s spoken to them about the Coronavirus pandemic.

The Special One has detailed how he and the club have been dealing to keep players in shape during the lockdown, as they try to give to the squad the best possible condition so they can all work out from home.

“Since we were no longer able to work together, when the lockdown took place in England, we’ve tried to never stop training and following the players”, José Mourinho told Record.

“In my case and that of my assistants, living practically next to the training centre, we would make our run there in the morning, an attitude that we maintain, and already on the premises we were preparing the work plan for the week, which we would get to the players’ homes through the ‘Zoom’ platform.

“As a club, we sought to equip the gyms of those who have them and help build some in the homes of others who didn’t have this support. As for those who live in smaller spaces, the best possible conditions were created to be able to work.”

“At the same time, with the use of GPS and Bluetooth, even from a distance, we can monitor and control all the training they were doing. And now? In addition to having implemented another type of work – quite limited, but on the lawns, as I already mentioned – it’s about waiting for new government guidelines.” 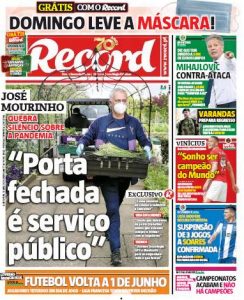 Mourinho says he’s been concerned about players who’ve been returning from injury, as they won’t be fully ready to play once the Premier League resumes.

“Our case is difficult to affirm, as we had several players who were subjected to surgical interventions and never trained on the pitch after the operations, or even touched a ball!

“So it’s a bit of a question for us how these players can return. However, we have followed the evolution of recoveries, as we maintain permanent contact with the medical department.”

“Now time is spent in preparing and organizing these individualised training sessions, so that at the end of the afternoon you can do the same as everyone else: try to respect the determinations as much as possible and wait, and pray, that this will end as soon as possible. Because, obviously, it’s a big concern for everyone. As citizens and family men, more than as coaches and players.”

Regarding playing behind closed doors, Mourinho says this isn’t what players and managers would like, but it’s a first step to try to get things back to normal. The manager shows some big respect to all the decisions that come from the government.

“Football with minimal conditions, of course, yes. There should only be football with the minimum conditions, but which must be defined by the competent authorities in terms of health. Speaking of the game itself, should we play behind closed doors? I say yes. Because it’s a way to get the industry up and running. On the other hand, it’s giving people what they love so much. I would say it’s almost… a public service.”

“Obviously for us, coaches and players, the essence, the dream and the biggest motivation is to play with stadiums full of fans, but if we look at things from the perspective of how many millions will be watching us in a game behind closed doors, we change our way of thinking.

“I’m in favour of football behind closed doors, if that is the case, but the most important thing is the definition of security conditions by the entities that dominate the matter. And I don’t.”

Finally, Mourinho says this is the reason why he hasn’t been speaking a lot to the media lately.

“For not understanding it, I’ve been silent since the beginning. I refuse to express an opinion on issues that transcend my knowledge. And there are so many contradictions in the opinions. Even by those who know the subject, be they scientists, virologists or epidemiologists. Or others who think they understand a lot about the subject…”.