Dani Ceballos has made only 17 starts in the league since joining Real Madrid from Real Betis in 2017.

Despite the limited playing time with Los Blancos, the midfielder has impressed for  Spain U21s at the ongoing European championship. He was also the player of the tournament for the last edition in 2017.

Spanish newspaper AS on Monday claims Tottenham Hotspur are interested in the 22-year-old.

It’s stated the player is a ‘priority’ target for Mauricio Pochettino and Spurs are the ‘best placed club’ to land him.

Tottenham’s idea is to sign Ceballos on a permanent transfer. Since the former Southampton manager is very keen on him, they are also open to the idea of a loan deal.

The midfielder still has four years left on his contract with the La Liga giants and his dream is still to triumph at the Santiago Bernabéu, which is why he would prefer a temporary move.

Real Madrid president Florentino Perez and director José Ángel Sánchez trust Ceballos’ talent and potential, but Zinedine Zidane does not count on him for next season. 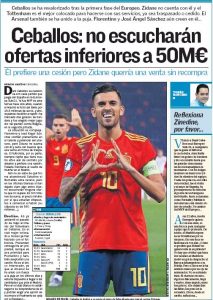 AS explain it’s still not clear if Ceballos will leave Real Madrid on loan or on a permanent transfer.

Should it be the latter, then the 13-time European champions will not listen to offers below €50m for the Spaniard.

If Tottenham are keen on landing Ceballos and are unwilling to meet Real Madrid’s demands, they could sign him on a loan deal this summer.