In their Saturday edition, the newspaper reports Tottenham are ‘already negotiating’ to sign the Real Betis midfielder. Spurs are said to be ‘willing to pay €60m’ for the player, something which has been reported before.

AS then go on to an assumption that signing Lo Celso would mean Tottenham are more inclined to letting Eriksen leave for Real Madrid.

They then reiterate the Premier League club have been in talks with Betis ‘in recent days’.

There’s something about this particular report which inspires confidence, because they go on to talk about interest from other clubs in other Betis players.

From what we can gather, the journalist is a specialist on football in the Seville area.

Whilst the Eriksen slant may well be an assumption, the Lo Celso claims should be given more weight. 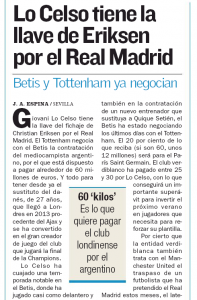 Betis loaned the player from PSG this season and have paid €25-30m to make the move permanent. The French club are due 20% of the total transfer fee.

It’s pointed out that if Tottenham sign him for €60m, then even after the cost and PSG percentage is deducted, there will still be funds available for other players.

That would surely depend on Spurs paying the fee upfront, or at the very least making the amount guaranteed rather than dependent on bonuses.

They state Tottenham ‘have put €60m on the table’, and explain that’s come from their own information.

As it stands, Betis aren’t willing to accept, wanting Spurs to go higher. Lo Celso has a €100m buyout clause.