Monday’s edition of AD, one of the major newspapers in the Netherlands, touches on the situation between Steven Bergwijn and Ajax.

To start the article, it’s explained Ajax are ‘rubbing their hands’ over Sven Botman’s impending transfer, because it’s believed they’ll make about €3m due to a sell-on clause they agreed when the defender moved to Lille.

Ajax can use this money to help them ‘push through’ incoming signings, of which the Tottenham player is the most important. According to AD, the Dutch club and Tottenham Hotspur have ‘already agreed’ the fixed fee for the transfer, which will be €25m.

However, Spurs want some variables added to that as well, presumably so they can present it as a €30m transfer. On top of that, AD say Tottenham also want to present a player themselves before announcing Bergwijn’s exit, although there’s no indication who that could be. 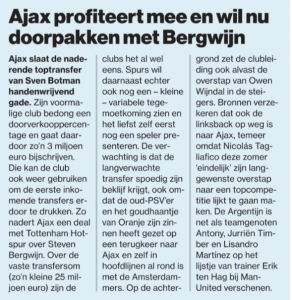 Despite that delay there’s clearly now confidence from Ajax that the Bergwijn deal is on the way to happening, and they shouldn’t have to wait too much longer.