Barcelona were keen on bringing Neymar back to the club in the summer, but failed in their efforts to sign the Paris Saint-Germain forward.

Speaking to Caden Ser last month, Gerard Piqué revealed the Barca squad were ready to defer payments on their contracts in order to help the club land the Brazilian without breaching Financial Fair Play regulations.

“What we asked the president was that if we had to lower our salaries, we would do it, because we knew the Fair Play issue was and how the relationship with the president has always been very good,” Piqué said.

“Instead of charging what we have to charge the first year, we pass it to the second, third or fourth so that Neymar can come in.”

A ‘Top Secret’ report from Mundo Deportivo now claims Piqué and his teammates’ request couldn’t have been taken into consideration by the Spanish champions strictly due to economic reasons.

The Catalan newspaper claims the deferred payment of salaries wouldn’t have benefited the Blaugrana when it comes to FFP regulations. That’s because salaries are counted for this financial year, even if the payment in delayed.

Mundo states in financial terms it is known as an ‘accrual, a deferral of a payment or a collection’ and they add the auditors would never have accepted it.

They add, ‘Payment (or collection, for example, a transfer in instalments) is always noted in the period in which the consideration takes place, even if it happens later.’

‘It has been the case in recent times, according to some information, of some very important players in the squad who accepted the delay in the payment of part of their salary, but these postponements never implied a decrease in the wage bill in the liquidation of the year, which is what marks spending levels according to FFP. It benefits the treasury, not the liquidity. 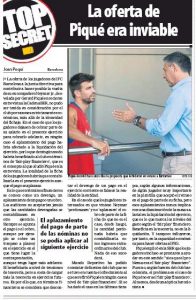 ‘Nor, therefore, did they affect the economic capacity to make offers to PSG.’

If the players would have sacrificed part of their wages to help Barca sign Neymar, that money would have been taken as an additional income to the club.

Mundo have confirmed, via club sources, that Piqué’s proposal would not have been considered at any point of time because of FFP.