Liverpool have once again had a packed season, which has obviously had an impact on several players.

Jurgen Klopp’s side have been in a battle for the Premier League title the whole campaign, won two cups, and are also in the Champions League final. It really couldn’t have been much harder for the Reds, and the side put out against Southampton showed the issues the club are facing.

One of Klopp’s biggest worries right now is Fabinho, with the key midfielder picking up an injury. There’s hope he’ll make it back to face Real Madrid in the final, but there’s no certainty for the Brazilian just yet.

Ahead of that match against Los Blancos, Fabinho has been speaking to AS.

As part of the conversation, the Spanish newspaper asked what physical state the Liverpool squad is currently in: “I think I can speak a little generally: We are very tired. It’s true because we’ve been playing on weekends and during the week for a month now, always game after game and important games; which makes you physically and mentally tired as well, but this team worked very hard to get here, to this point in the season with a chance of winning all four trophies.

“There are few games left, there is a final sprint and the coach will have a bit of a headache to form a team because 120 minutes at this point in the season (for the FA Cup final) is not easy. I hope that those who play are well, prepared, because it will be very hard.” 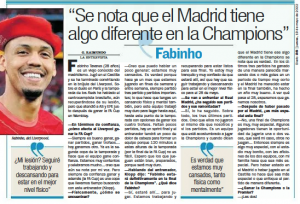 Fabinho was then asked about his own situation, after Klopp insisted the player will be in contention for the Real Madrid game: “Yes, I’ll be there… to play. We are working and recovering to be ready for that final. I am very calm and very confident that I will be there, so we have to keep working and resting to be at the best physical level for May 28th.”

Liverpool fans will certainly hope that Klopp and Fabinho are correct, and that the midfielder will be available.