Celtic and Rangers are in a tussle to sign Riquelme from Atletico Madrid, report Marca in their Monday edition.

The two Scottish Premiership clubs have been linked with the 20 year old repeatedly over the past month or so, and they’re not the only clubs interested.

Joining Neil Lennon and Steven Gerrard with interest is Hoffenheim and Ajax. It had previously been reported the Dutch club are leading Rangers and Celtic, although Marca don’t mention that today.

Riquelme has already outgrown the club’s B team and it’s thought that a big decision needs to be made this summer. Atletico don’t want to lose the young attacker, but they also know that for him ‘it’s time to decide now’ given that his contract expires in June 2021. 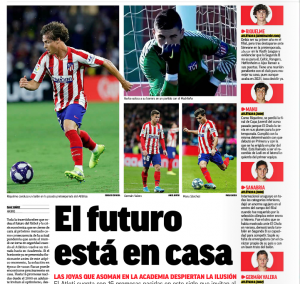 One option could be to extend the contract and then loan him elsewhere, something which may interest Celtic and Rangers. If not, it’s all down to how much playing time Diego Simeone intends to offer.

Should it not be enough, then Riquelme may start seeing his long term future elsewhere, and if that’s at Ibrox or Celtic Park then it would be an impressive addition for Scottish football.