It seems Benfica are not the only Portuguese side interested in Manchester United goalkeeper Joel Pereira.

The Eagles could actually have to battle their rivals for the youngster, since according to SIC Notícias, the player is wanted by Porto and Sporting as well.

The TV channel claims that Manchester United have already offered Pereira a new contract, since his deal expires next year, but the player is still to give the club a response. 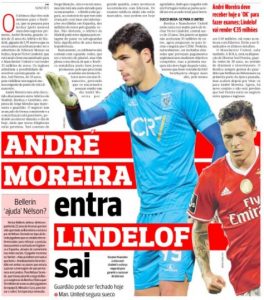 It’s said that the clubs are only monitoring the situation for now. After José Mourinho claimed Pereira is the best Portuguese goalkeeper of his generation, his price would have gone up.

Newspaper A Bola also has a bit of information regarding the goalkeeper today. They say that even though Benfica were interested and Manchester United would accept to let him go, things have changed because the Eagles have now signed Atletico Madrid goalkeeper André Moreira.

Pereira was supposed to be part of the Victor Lindelof deal so things would move quicker, but after this last Benfica signing, he would only join the Eagles separately.