Martin Ødegaard failed to have regular minutes at Real Madrid, especially at the end of 2020, and that convinced him to join Arsenal on a loan deal in January.

Since moving to the north London club, the midfielder has made three appearances and has convinced Mikel Arteta.

In his pre-match press conference on Wednesday, the Gunners manager admitted the 22-year-old’s fine displays for Real Sociedad was one of the reasons why he brought the player to Arsenal.

The Norway international spent the last season on loan at Real Sociedad and he finished the campaign with nine goals and seven assists in all competitions.

Nacho Monreal, who expected Ødegaard to stay at the club, explained the disappointment of seeing him leave didn’t last all that long thanks to the La Liga side’s quick actions. 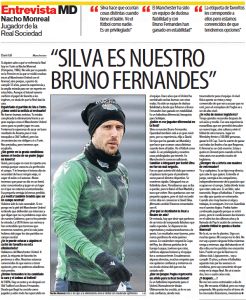 “It was a great success for the club [signing Silva], and both the president and the sporting director deserve applause. They moved fast,” Monreal told Mundo Deporitvo.

“Odegaard was a key footballer. We thought he was going to stay, but Real Madrid called him and he had to go back.”

“We were left with that little hole, but the club did not take three days to convince David Silva. What a change! We are delighted with it.”