Even though Chelsea had never been seriously linked with signing Bruno Fernandes from Sporting until last week, things are getting pretty intense in the past couple of days.

On Monday, we covered the claims from A Bola which said the Blues have been in contact for the midfielder, and have entered the big competition for his signature.

Now the same newspaper comes with a new report on Tuesday, this time saying Chelsea will be scouting the 23-year-old on Saturday.

The London side have reportedly requested a seat at the Estádio de Alvalade, where they will be watching Sporting face Benfica in the Lisbon derby. 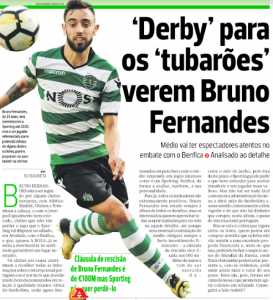 Chelsea scouts are reportedly making this trip especially to watch Fernandes. That’s a pretty reasonable conclusion, because the Blues aren’t one of the clubs who have scouts watching Portuguese league matches regularly.

A Bola says Sporting are not very keen on selling Fernandes in the summer, and there’s no money that will take him from Lisbon. However, the pretenders think different, and consider that a decent amount can convince the Lions to sell.

The player currently has a €100m release clause which expires in June.