A couple of days ago, Sport Witness covered a claim from Record, a Portuguese newspaper, that Manchester United have reached an agreement to sign Umaro Embalo.

The very highly rated 16 year old attacker was presented as a sure thing for Jose Mourinho, although no real details of a transfer were shared.

As is often the case, it seems Record jumped the gun, but, as is also often the case with Portuguese transfer claims, there seems at least something in this one.

Speaking to A Bola, another Portuguese newspaper, the youngster’s agent was quizzed on 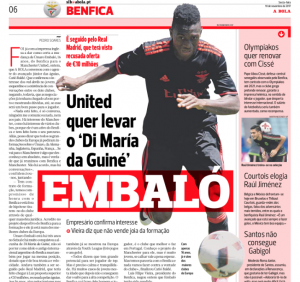 the Manchester United claims, and explained: “Nothing is done, and the conversation, nobody communicated anything to me, nor to the parents. He has interest from several clubs, because he is an asset of Benfica and has gone down this route well.

“I can say that all the great clubs in Europe have already asked for information about Umaro, from Germany, England, Spain, France.

“If he’s going to Manchester is something that I don’t know at all, but it’s true that we have already met with Benfica and Manchester, there is no agreement, but there are conversations.”

All the Manchester United talk has shaken RB Leipzig, report Correio de Manha, with the 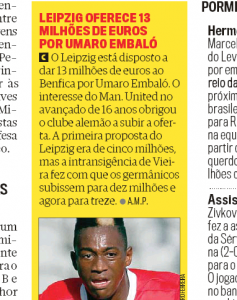 It’s the second offer, RB Leipzig had already forwarded €6m, but the Manchester United claims have panicked them, so say Correio de Manha.

Again, there’s quite possibly some truth in this but the exact claims may be a little off.

Umaro Embalo is likely a name we’ll all have to get used to.