Home Europe “The best” – Everton player ‘would have stayed’ at previous club if...
SHARE

André Cury’s time with Barcelona came to an end after Josep Maria Bartomeu relieved him of his duties at the Catalan club.

Cury was the La Liga side’s main man in Brazil and had a role in helping the Camp Nou side complete deals for players representing clubs in the South American nation.

Among them was Everton defender Yerry Mina, who first came to Europe when Barca took him from Palmeiras in January 2018.

The defender made five La Liga appearances in the second half of the 2017/18 season before being shipped out to the Merseyside club in the summer of that year.

Mina struggled for regular minutes in his debut season in the Premier League, but has been a regular for the Toffees since the start of the last campaign.

Sport travelled to Sao Paulo to interview Cury and he stressed the Spanish club were forced to sell the Colombian centre-back to Everton to ease their financial situation.

“Yerry Mina is the best Colombian central defender and, when the club sells him, after six 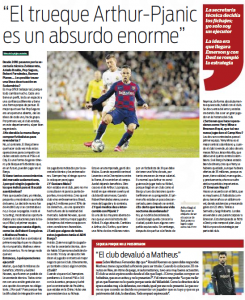 months they sign Jeison Murillo, who must be the fifth Colombian central defender,” Cury said.

“If Barca had been good with money, I think Yerry would have stayed, even if there were offers of €35m, because he is young, has quality, scores goals… and, precisely, now they suffer at the back in important games.”

Barca reportedly paid €11.8m to Palmeiras and six months later, they sold Mina to Everton for more than double they invested in his signing.