Late in the winter market, Marseille took Olivier Ntcham on loan from Celtic and retain an option to make his stay permanent after this season.

The Bhoys owned player’s signing created headlines for the wrong reasons as his arrival played a role in André Villas-Boas’ departure from the club.

Jorge Sampaoli was appointed as AVB’s successor and the Celtic midfielder has failed to convince the Argentine.

L’Equipe on Saturday explain a ‘dozen players’ are expected to leave the French club at the end of this campaign and new additions must be made to the squad to ‘satisfy’ Sampaoli.

The Celtic man’s situation is discussed, given he’s been restricted to just over 200 minutes of action across six matches in all competitions. 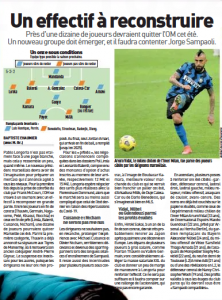 It’s claimed Marseille’s leaders ‘do not wish to prolong’ their association with the 25-year-old and Michaël Cuisance due to their ‘terribly disappointing’ spells.

The duo also became ‘sparring partners during the long training sessions of Sampaoli.’

With Marseille not in favour of making Ntcham’s stay permanent, he will have to return to Celtic, where his future is yet to be written.