Home Uncategorised ‘He has a terrible job’ – Manager may have been wiser to...
SHARE

When he left Manchester City after 11 years, many thought Vincent Kompany would simply retire.

He didn’t, instead getting himself a job at Anderlecht as player/manager, but his time there, so far, hasn’t been great.

That original role didn’t last long, eventually letting someone else do the tactical work until the end of the season, before taking over as the head coach from this season onwards.

That hasn’t gone to plan either, with just three wins from their first nine games, as they sit ninth in a league the club has been used to winning for many years.

There’s no denying the club has changed in recent times, with their dominance waning over time as sales were made without proper replacements and youngsters were thrown in at the deep end too soon.

Some came out with their head held high, like Jérémy Doku, who was sold to Rennes for €25m in the past transfer window, but the manager’s job has been made considerably harder at Anderlecht, through no fault of Kompany’s.

The former Manchester City centre-back is doing what he can with the tools he has been given, and former Anderlecht and Ajax forward Jan Mulder feels the 34-year-old might have been better off staying at the Etihad. 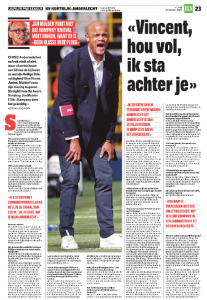 He told HLN: “I will stand up for [Kompany]. He could have become Pep Guardiola’s assistant and then run Manchester City after two years. His family were attached to the city, and then he went down to Neerpede. I’ll take my hat off to Kompany”.

Mulder feels the manager is ‘asked to show his class with a mediocre team’, as making the top four in Belgium would be seen as a great achievement, which isn’t what the club should be about.

Advising him to ‘put a little more Ancelotti in his Guardiola’ when it comes to tactics, the former striker also thinks Kompany shouldn’t give up.

He added: “He has to persevere. A few more years. I’m on his side. He has a terrible job. I can’t think about it. He can no longer put himself in defence. There’s no Vercauteren in midfield, and no Rensenbrink or Van Himst up front.

“But I’m glad Coucke did everything he could to get Kompany to the club. That’s his legacy. When I see him standing on the sideline on Sunday afternoons, I think: ‘Yes, all right, that’s my Anderlecht'”.